UFO Gaming, the decentralized gaming platform bridging traditional games onto the blockchain, has been touted as the next Axie Infinity by established experts in the GameFi space.

The comparison to giant Axie Infinity is no easy feat for game developers just starting to break into the industry. UFO Gaming has managed to achieve plenty during their short time in the play-to-earn market. 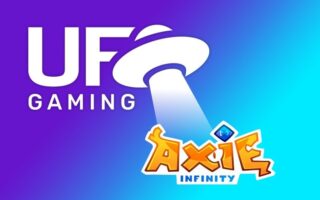 They’ve made history as the first-ever GameFi company to sponsor an e-sports tournament, with an Apex Legends Tournament that was hosted by Twitch streamers Apryze and Nokokopuffs and a $10k cash pool at stake.

They’ve also recently announced themselves as Technology Sponsors of the Chainlink Fall 2021 Hackathon, amongst other industry leaders including Google Cloud, EY, Filecoin and Polygon, thereby establishing themselves as a truly community-oriented project.

Built on the Ethereum blockchain, UFO Gaming places players within the ‘Dark Metaverse’, a closed-loop ecosystem consisting of different P2E games. Players generate in-game assets, such as skins or weapons, which can be used within quests. Gamers can additionally purchase Virtual Land, treated as NFTs in the game, staked to earn rewards from the game’s revenue.

The key difference? UFO Gaming sets itself apart with ambitious goals and richly designed games. With goals to partner with AAA studios and prestigious partnerships already under their belt, it’s not long before $UFO rises in valuation and breaks through the GameFi industry.

UFO Gaming is an independent gaming company, developing blockchain games within an ever expanding ecosystem. Players come together to create their own clans, own and trade virtual land, and earn NFTs and cryptocurrency, all within the Dark Metaverse.

UFO Gaming seeks to bridge the gap between blockchain and traditional mobile and PC games, offering unprecedented player opportunities within the P2E realm. The Dark Metaverse is a closed loop ecosystem that will consist of P2E games with breedable, in-game NFTs that will allow users to receive revenue. By utilizing the decentralized mechanics of blockchain, the game will allow any player to turn a profit, creating a new paradigm for community-driven P2E projects.

Rod Washington:  Rod is a blogger, writer, filmmaker, photographer, daydreamer who likes to cook. Rod produces and directs the web series, CUPIC: Diary of an Investigator. He also produces news and documentary video projects. Check out his podcast StoriesThisMoment at https://m3e.d71.myftpupload.com/stm-tncn-podcasts/

The Return of the Arizona International Auto Show